This post is going to be a little different from usual; instead of markets, we're going to look at a video game, namely, Counter-Strike: Global Offensive (CS:GO). CS:GO, like most great games, is easy to learn but deceptively hard to master. For those at are unfamiliar with the game, we'll give a quick overview below.

CS:GO is a competitive zero-sum game in which two teams of 5 players each try to win rounds. The first team to 16 points wins the game. The game is asymmetric as there are two distinct sides: the terrorists (T-side) and counter-terrorists (CT-side). After 15 rounds, each team switches sides. The goal of the T-side is to either eliminate all CT players or to plant a bomb and have it explode before the CT-side can defuse it; the CT-side wins the round if kill all the players on the T-side before the bomb is planted, if they defuse the bomb, or if time runs out on the round. this asymmetric rule-set implies that the CT-side can lose a round even if they kill all the opposing players, while the T side cannot lose if they eliminate all CT players.

In order to get a better idea of the structure of the game, let's look at a top-down perspective of one of the most famous and iconic maps, Dust2: 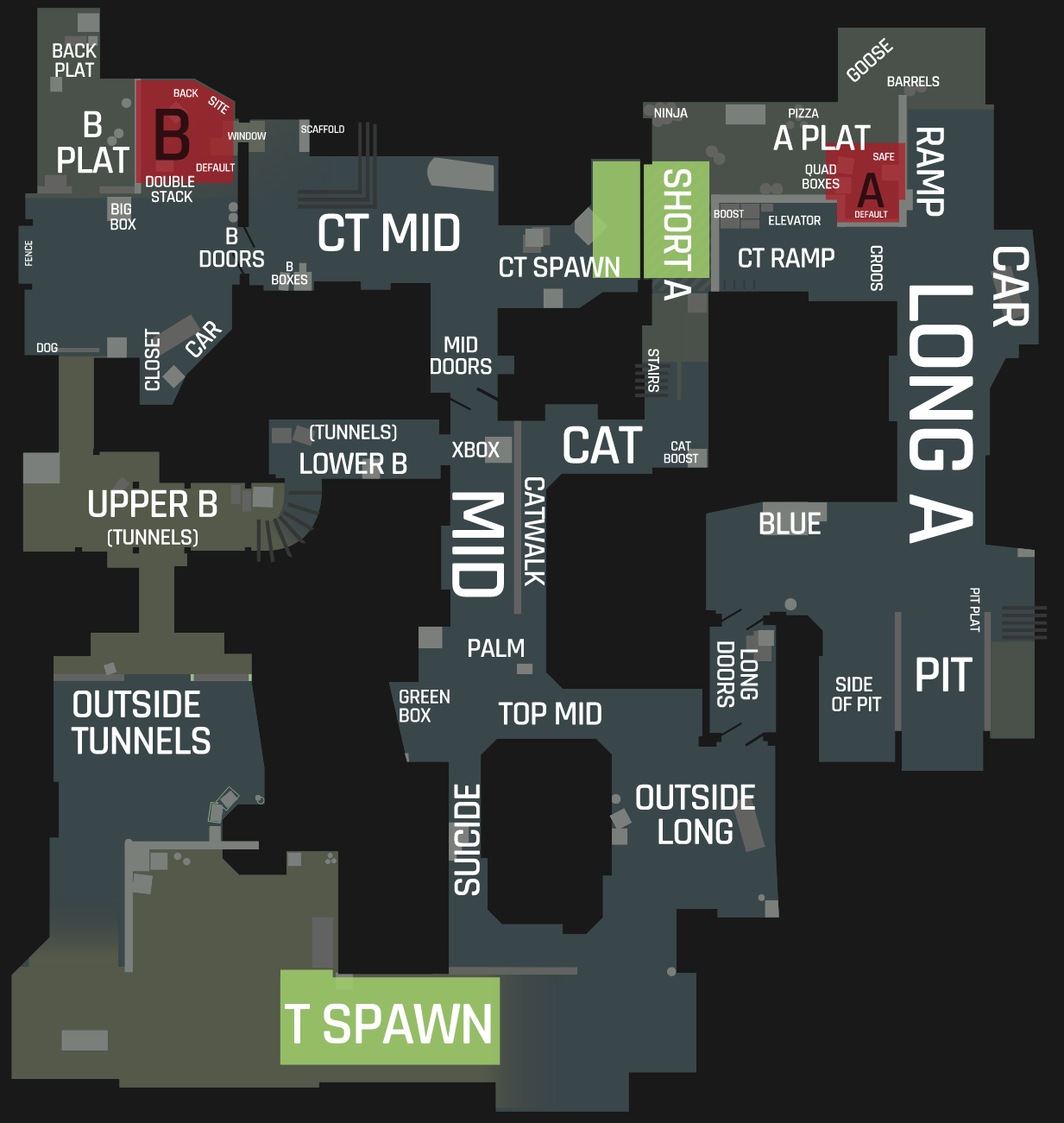 T-side starts the game in T-spawn and must plant their bomb at one of two locations: B-site or A-site, designated by the red areas on the map. the CTs start off in CT spawn and must try and defend these two sites. If T-side manages to break the CT defenses and plant the bomb, the remaining players on CT try and retake the bombsite (either A or B) and defuse the bomb before it explodes.

Because of the asymmetric nature of the game, I thought it would be interesting to analyze how much a kill effects the game for each side. To start off with, we'll first look at the situation where the number of players on each side is equal.

First up, let's look at the so-called even match-up, where there are an equal number of players on each team: 5v5, 4v4, etc. Using over 400,000 rounds of match data from mid-2018 (click here for the original dataset), we aggregate all rounds with even match-ups and the side that wins. From this, we can calculate a cumulative win probability for each match-up: 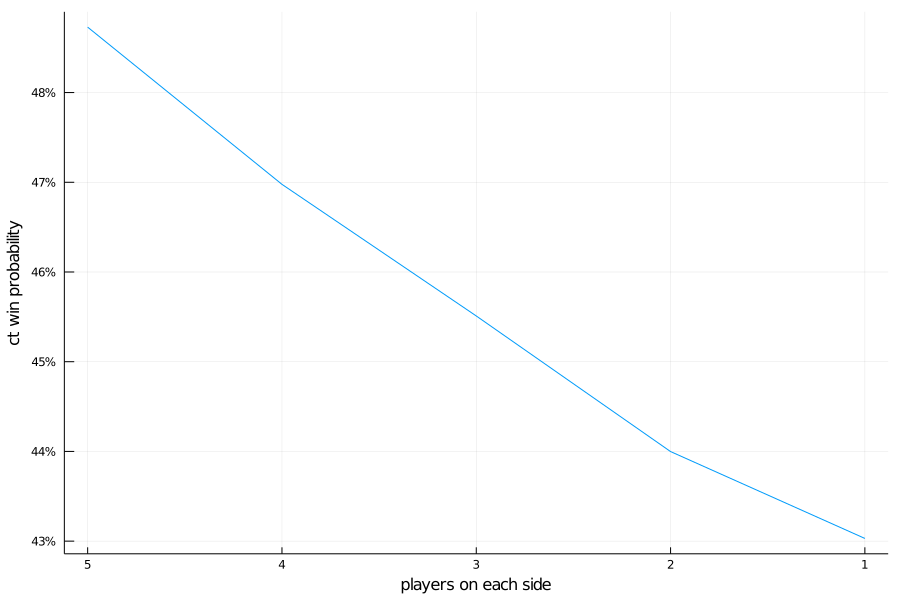 From the above graph, it's seems that the T-side enjoys a significant advantage. Even when the match starts, the CT-side has a less than 50% of winning the round and as trades are made (a situation where each team loses a player), the advantage the T-side has only goes up. But is this significant? Let's look at a table of CT-side win rates and their associated p-value:

It's clear from the minuscule magnitude of the p-values that we can reject the null hypothesis, namely that each even match-up is fair: a 50% chance of each side winning the round.

Now that we've established that even when each side has the same number of players the T-side has an advantage, let's consider all the possible combinations. Clearly a situation when 5 CTs are up against 4 Ts is not a fair fight (We might assume that CTs have the advantage), but unfair is it? After crunching the number for each permutation, we get the following graph: 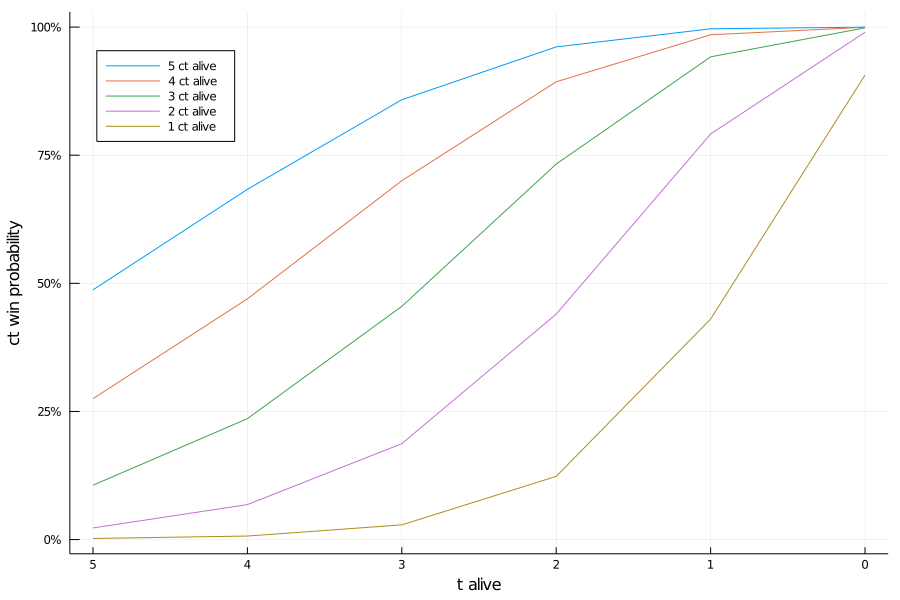 Interesting! When the CTs have close to the number of players as T-side, the first kills make the most difference. A 5v5 for the CT side gives them a 48% chance of victory, but netting the first kill shifts the odds considerably to 68%. When the difference is large, the final kills have the highest percentage chance, as the chance of the CT-side winning is so low to start off with. Below is a graph of the exact figures:

I know little about professional CS:GO strategy and the data isn't taken from professional games, but we can quickly infer a couple things from the data:

Anyways, this has been a fun little post to write, I hope you enjoyed it! Click here to view the GitHub project.